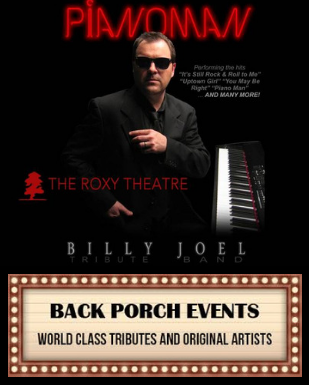 A Tribute to Billy Joel

Uptown Girl - We Didn't Start The Fire - Just The Way You Are - She's Always A Woman To Me - Pianoman - You May Be Right - and many, many more!

Billy Joel, the American singer-songwriter and pianist was born in the Bronx, New York, and raised on ​Long Island, New York, places which have a heavy influence on his songs. Since releasing his first hit song, "Piano Man", in 1973, Joel has become the sixth best-selling recording artist and the third best-selling solo artist in the United States. Joel had Top 40 hits in the 1970s, 1980s, and 1990s, achieving 33 Top 40 hits in the US, all of which he wrote himself. He is also a six-time Grammy Award winner who has been nominated for 23 Grammy Awards. He has sold more than 150 million records worldwide, making him one of the best-selling artists of all time. Jeff Brewer has been paying tribute to The Pianoman for over 20 years with his incredible show. You will sing along with all of Billy Joel's greatest hits and take a walk down memory lane as he jumps from one classic hit to another!