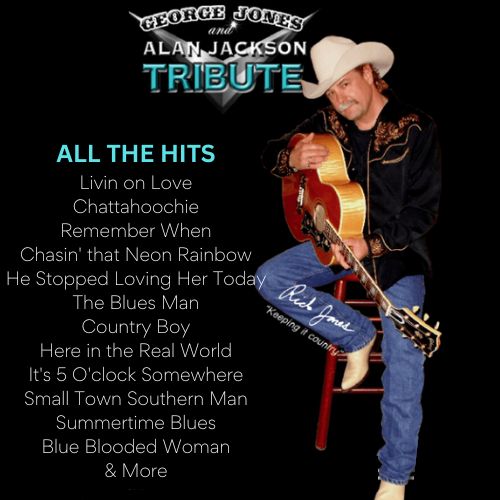 Gone Country lead singer Rick Jones has an undeniable passion for tradition and a love of music that shines every time he takes the stage. He has been performing country and bluegrass music for most of his life. As a boy, Rick was influenced by artists of WSM and the Grand Ole Opry and taught himself to play guitar. He was soon honing his skills as a singer-songwriter and quickly became an in-demand vocalist and musician. Travelling across North America, from Toronto to Nashville, Rick was recording and performing covers and original songs. His resemblance to Alan Jackson was constantly being noticed, often being mistaken for the star and asked for autographs. Encouraged by fans and fellow musicians, Rick began to add more Alan Jackson hits to his repertoire and soon the Gone Country Tribute was born. Aside from his stellar voice and uncanny resemblance to Alan Jackson, Rick also shares another major similarity with the country star – both name their musical hero as the legendary George Jones. Making the Gone Country Tribute a truly unique act is their Salute to George Jones, which features classic anthems and ballads as well as some musical surprises that always excite the audience. Rick’s ability to morph his voice effortlessly from Alan Jackson to George Jones is unparalleled and enables him to embody the heart and soul of the music. Performing with Rick is the Gone Country Tribute Band, which features some of Canada’s most talented and sought-after musicians. Gone Country – a one of a kind show not to be missed!